History of the Leland Yacht Club

Upon reviewing the minutes of the Annual Board Meetings and Annual Meetings of the LYC, the following is presented to show a running history of events - minus the usual items of approving reports, electing officers and board members, and discussions of annual sailing committee activities.

Our club was incorporated on August 17, 1936, as a not-for-profit Michigan corporation with its first board of directors showing Ralph G. Lockwood. Charles W. Spooner, Jacob R. Schwarz, C. H. Stratton, Kari Detzer, D. R. Mitchell and John T. Hayes. The purpose of the club was stated "to promote, foster and engage in yachting, boating and all aquatic sports for pleasure and exercise; to maintain Lake Leelanau north of the town of Lake Leelanau and the communicating channels free of dangerous obstructions such as snags, dead-heads and the like or provide danger signals therefore, maintain sufficient depth of the channels for the free passage of boats and cause said channels to be properly marked; to cooperate with proper authorities and officials in the promotion and development of the contemplated harbor in Lake Michigan at the town off Leland; to develop and provide a suitable yacht pier in Lake Leelanau for the use of members and guests and particularly for the harboring and anchoring of boats of those members not residing on Lake Leelanau; to cooperate with the proper officials and authorities in stocking Lake Leelanau with game fish; to provide members interested in sailing with such information as may be helpful in the purchase of sailboats, including the formal adoption of one or more classes of racing boats, to the end that the sport of sailing in Lake Leelanau may be developed and encouraged; to organize and conduct sailboat and motor races, regattas and swimming meets; and such further activities as may be determined from time to time of interest to the membership in respect to water sports."

The first year there were 41 member families and a pier was built in Nedow's Bay, racing buoys were established, they began to pay for dredging the Leland River, 450,000 fingerling trout, bass. Walleye and Brook Trout were planted and a life guard hired for the swimming beach.

In '37 water sports' carnivals were held on the Fourth of July and Labor Day and the First sail races were held. In '38 members were encouraged to buy "C" boats, Nationals or Snipes to hopefully form class racing. In '39 Dick Waite was awarded first place National One Design trophy for his boat "Sun Fun" and Clifford Matson's Snipe "Hi-Ho" won first place Snipe Trophy. In 1940 there is mention of a Yacht Club Booklet being published - does anyone have one for the record? Thru '41 the Treasurers' reports show the primary expense was building the dock plus its annual maintenance.

In early 1942 the board passed a resolution slating that in view of the war and the fact many members were called away, no formal dues would be collected and no annual meeting held. Informal racing and activities continued thru 1944. In '45 annul dues we're again collected and activities resumed. In '47 the first Dinner-Dance was held and efforts to promote a Lightning fleet were recorded. '49 saw the first Marathon race where all of the buoys on the lake were circled three times. 1950 saw the establishing of a Wednesday and a Saturday racing schedule which we still have today and a National One Design regatta was held. In '51 a committee was formed to consider building a clubhouse: in '52 the first by-law revisions were made. 1954 saw the World Champion NOD Regatta on our lake. The clubhouse was built during the winter of '53-'54 at an approximate cost of $8,000 with over $5000 being donated by member families. A new dock in front of the clubhouse was also built and the old dock donated to the town of Leland. The clubhouse was dedicated on July 10th, 1954.

1955 saw the annual dinner-dance but tickets went from $2.50 to $3.00! The Commodore established a new trophy for the "sailor showing the most improvement during the year." A Lightning Regatta was held. By 1956 the club had 90 members. The NOD fleet started the "Old-Timers" Regatta and a flyer on water-safety and boating courtesy rules was printed and distributed to members. The first map of Lake Leelanau with names of cottages was made and sold. Art work for the first map was provided by Sally Reahard. The Club continued to pay for channel marking in the Leland River. 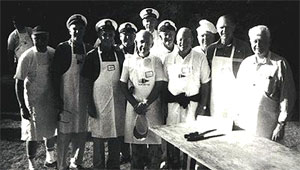 1957 saw another NOD Regatta and the "Bill Miller" regatta was started. Steps were built up to the Country Club from logs which lasted until the rebuilding in '79 with railroad ties. David Workum proposed a Junior Sailing program where the club would hire an instructor, sailing dinghies would be purchased and fees would be charged members' children for formal instruction. In '58 the concrete ramp was built next to the town dock for boat launching. 1959 saw the beginning of Sailing School with Ed Neild serving as the first instructor and Donna Riley and Joanne Gits as assistants. Three "Tech" dinghies were purchased and 40 children signed up providing an income of $1,467.50 the first year. The Yardarm was erected in front of the clubhouse and the parking lot east of the clubhouse was paved.

The decade of the 1960s saw a continuation of the many fine programs recently developed plus the utilization of the new clubhouse. In '70 the 470 class was accepted on probationary status for one year and four boats completed the racing season. A two day Lightning Regatta brought 28 boats; the west parking lot was paved and Mrs. Alfred Noling and Mr. Edward B. Evans were made life members. 1971 brought Roy Christianson of South Milwaukee Yacht Club as Sailing Master (his father was of NOD world championship fame.) 1973 saw 55 children in the Sailing School and "Sunfish" racing was established with 29 boats racing plus an exchange race with Omena Yacht Club. New LYC maps were printed under the guidance of Mrs. Noling, and Marilyn Pendergast handled sales. Forty eight boats entered the 470 Regatta. In 1974 four new Flying Junior sailboats were purchased from Vanguard Inc. of Peewaukee, Wisconsin. (A 13'2" fiberglass racing dingy x 5'3" beam which carries 100 square feet of sail with a 200 lb. minimum hull weight.) A beautiful sight on Lake Leelanau were the 59 colorful spinnakers of the 470's enjoying another regatta. Sunfish continue with over 30 active racers and a home-an-home regatta with Omena Yacht Club. The Barbecruise fed 725 people and club membership hit 307. A new Summer Directory was prepared in '75 and '76 saw Lasers on our Lake! An amendment to the bylaws created two new positions on the Board to be elected annually by active sailors, one for a member 21 years of age or younger. A most important task was accomplished by Commodore D. Workum when he finally persuaded Consumers Power to bury the power cables coming down the hill to Nedow's Bay past the launching ramp and the clubhouse (this unfortunately after one fatality and at least one near one.)

For '77 the clubhouse was painted, square dances were very popular and 40 boats competed in the first 470/Laser regatta. '78 saw another regatta with twenty-four 470's and 51 Lasers providing a lot of action and excitement for all! The NOD held their World Championships with 34 boats competing. The fishing tournament and Olympics continued with good participation. A Barbecruise logo was designed and with a branding iron each shingle was duly decorated. '79 saw this logo on a T-shirt, Keith Burnham drew a new LYC map, and the decade closed with a complete review and up date of the bylaws to reflect current organization and activities.

In further recognition of the Brady families affording us the use of the point, Carol Brady and her sister Barbara Becker were made Life members in 1987. The Workum and the Waite families donated a New Flag Pole and Ed Mallott donated a 1 x 150' property on the Lake south of Bartholomew Park. (LYC no longer owns this property.) In 1988 two sailboards were purchased with the Don Pendergast Memorial donation. Also in 1988 Bill Grogan, Jr. was made Flagmaster and given lifetime membership.

In 1990 Dr. and Mrs. Fenton donated a Sunfish with extra sails. In 1991 Hal Shoemaker donated an Optimist Dinghy. The Club purchased a new Pontoon boat and motor, and older Flying Juniors in perfect condition in 1993. Our flag poll was taken down and completely renovated, cleaned and painted by dedicated members in 1994. 1994 also saw the, repair of the LVC building roof and Mr. and Mrs. Muellich donated a Force 5 sailboat.

In the summer of 1994 The Richard W. Waite Scholarship Fund was begun with a donation by Ben and Shirley Wheatley. This was a memorial to Richard in memory of his love of sailing. Donations to this fund enable students to enter our sailing school who otherwise would not have the financial means to do so.

1995 was a year filled with improvements: A new container was placed on Brady's point. The club purchased a brand new Flying Junior and a new 8 hp motor for the aluminum boat. Another aluminum boat was donated so we were able to retire Bill Steel's aluminum boat. The sailors were thrilled to have a small microwave and refrigerator donated.

In 1996, a New Boat Fund was started to fund improvements and repairs to our fleet. Over the next several years we were able to replace 4 very old FJ's with new FJ's, repair Sunfish and their rudders and refinish the dagger boards. Donations of boats, lifts and funds have helped to keep the LYC fleet strong!

In 1999, an outdoor water fountain was donated by family and friends of Jack Stimson in his memory. Memorials continued into the year 2000. 32 sailing school students spent a morning aboard the schooner "Inland Seas" learning about the Great Lakes ecosystem. This educational sail was a gift from Logan and Sherrie Watt Hardie in memory of David M. Watt. During the summer of 2000, a telescope was donated in memory of Jane and Bill Grogan by the Grogan Family. This addition has made watching our young sailors in sailing school, or identifying the skipper in a race much more enjoyable.

In 2002 the creation and sale of a new map of the lake was coordinated by Laura Paine. With the proceeds of this sale a new fleet of Butterflys was purchased for the club. In 2005 LYC improvements included a Whaler to the fleet, a walkway of dock along the shore allowing easier access to the sailboats and the clubhouse was remodeled adding a second floor.

Through dedicated volunteers we honor tradition while also creating new programs and activities. Our clubhouse, fleet, sailing school, chandlery and events are always evolving to best meet the needs of our membership. And as such, we invite you to become involved-opportunities to help and guide your club are available in every part of its operation, so don't hesitate to pitch in!

The numbers 1-9 at different points around the lake represent the historical locations of permanent markers.

You can see more detailed maps of Leland and Lake Leelanau, including aerial photos and nautical charts, on our Links page.